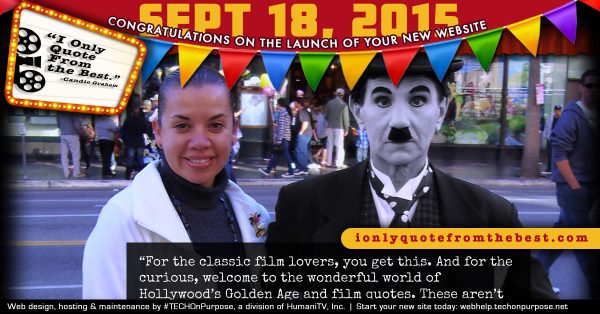 SAN ANTONIO, TEXAS – September 18, 2015 – Please join us in congratulating Author Candie Graham (ionlyquotefromthebest.com) on the launch of their new website supporting her Classic Film book “I Only Quote From the Best.” 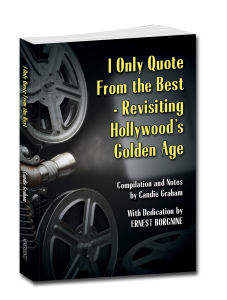 I should have been born in 1927. I got the next best thing: introduction by my parents to classic films at an early age, which began my life-long passion to get in touch with my inner flapper, my inner Rosie the Riveter, my inner Hollywood starlet. The desire to connect with Hollywood’s Golden Age, 1930-1959, dwells deeply within as far back as my memory allows me to remember. What began as interest now represents my life’s passion as a classic film scholar.

She loves them all. Musicals. Comedies. Action. War. Drama. Film Noir. You name it, she’s watched it. “What draws me to classic film is what continues to draw so many others to it: Hollywood’s Golden Age captured a time in film history of elegance, refinement, and simplicity; Hard work, beautiful faces, debonair men, raw talent, and, of course, the big studio system” says Mrs. Graham.  “The doers of tinsel town worked their magic. Their masterpieces and the faces gracing the screen fade not from our memory. The countless film quotes befitting any occasion exceed far beyond AFI’s Top 100 List.

I Only Quote From the Best – Revisiting Hollywood’s Golden Age is where to find these gems.

My name is Candie Graham and I only quote from the best!

Candie’s new web site ionlyquotefromthebest.com was officially launched today, along with her new author Facebook & Twitter pages. #TECHOnPurpose is pleased to provide ongoing support for further expansion and development of the web site for the next twelve months.

“Candie is a life long friend, high school alumni and fellow classic movie fan ,” says Matt Tankersley, #TECHOnPurpose Founder & CEO. “The joy of working with her on this project is hard to compare with any other.  Thanks for sharing in all the great quotes and lines.  Thank you for affording us the opportunity to bring your book and quotes to life on the web.  And never forget “Socks up boss! [ -Marlon Brando, “The Teahouse of the August Moon, 1956]”

About #TECHOnPurpose
#TECHOnPurpose is a full-service web, digital design & enterprise technology business partner with decades of experience, an aptitude for exceeding expectations & a passion for giving back. #TECHOnPurpose offers clients a comprehensive suite of technology products and services focused on keeping an ever-mobile workforce, securely & seamless connected to customers, peers & partners – anytime, anywhere, any device.

#TECHOnPurpose is a division of HumaniTV Inc. – a privately held company based in Austin, Texas.

Send a Facebook message to TECHONPURPOSE – you just opened a ticket!

Matt Tankersley is an experienced startup and operating entrepreneur with uncommon ability to cast vision, adapt and execute to plan.  Mr. Tankersley is a technology maven & self proclaimed #WEvangelist.

Thanks for attending the 2022 Lake Conroe Invitational Pickleball Tournament. Drop us your vitals here and a member of our team will reach back promptly to schedule a time to review and explore opportunities for shared technology success.

Thanks for reaching out and #ChillingWithTOP. Drop us your vitals here and a member of our team will reach back promptly to schedule a time to review and explore opportunities for shared technology success.

Once you have entered all required contact details, you will be prompted for more information about your request.