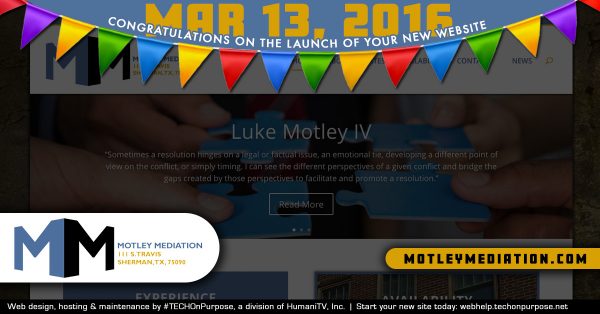 SHERMAN, TEXAS – March 13, 2016 – Please join us in congratulating Luke Motley IV (motleymediation.com) on the launch of his new website.

Over the course of his twenty plus year legal career, Mr. Motley has had jury trials in JP court, county court, state district court and federal district court. He has prepared and argued appeals in federal and state appellate courts; and prepared and submitted a Writ of Certiorari to the United States Supreme Court on a constitutional issue involving equal protection. Luke has been on both sides of the docket and handled business disputes, partnership disputes, zoning and regulatory issues, banking issues, personal injury, medical malpractice, trust and fiduciary duty litigation, consumer disputes, bankruptcy adversaries, property disputes, and DTPA claims. He has also served as a Trustee for a trust, and represented banks and handled contractual and transactional issues. This breadth of experience sets up well for his mediation practice.

In 2012 Mr. Motley made a decision to leave the private practice of law and enter the business world full time.  He accepted the position of President and CEO of the Hunter Buildings group of companies.  Hunter is the world leader in manufacturing, leasing, selling, and installing blast resistant modular buildings primarily to the petrochemical industry.  Based in Houston, with operations in Canada, Europe and the Middle East, his experience with Hunter brought a different perspective to the legal system and to litigation in general.  The business perspective of litigation is quite different from the trial lawyer’s perspective which is quite different from the mediator’s perspective – thanks to his time at Hunter, Mr. Motley has all three.

In 2015, Luke reduced his role at Hunter to focus on his mediation practice in North Texas.

The new motleymediation.com web site was officially launched today, and includes practice and rates details, along with mediation practice news and a new interactive mediation appointment calendar.  TechOnPurpose is pleased to provide ongoing support for further expansion and development of the web site for the next twelve months.

“This was a fun project that afforded us a deeper dive into the capabilities and limitations of online scheduling and simultaneous integration with Google and Office 365 calendaring systems,” says Matt Tankersley, TechOnPurpose Founder & CEO. “Thanks for the opportunity to help Luke & best wishes for the growth and expansion of your mediation practice.”

Luke Motley IV P.C.
Luke Motley IV follows three generations of bank presidents in small town East Texas. His family and educational background has been in business, where he has developed a deep appreciation for working through commercial problems to save clients money and time.  Luke is an accomplished 20+ year attorney with broad experience in business litigation, trial lawyer and mediation practice.

About TechOnPurpose
TechOnPurpose is a full-service web, digital design & enterprise technology business partner with decades of experience, an aptitude for exceeding expectations & a passion for giving back. TechOnPurpose offers clients a comprehensive suite of technology products and services focused on keeping an ever-mobile workforce, securely & seamless connected to customers, peers & partners – anytime, anywhere, any device.

TechOnPurpose is a division of HumaniTV Inc. – a privately held company based in Austin, Texas.

Send a Facebook message to TECHONPURPOSE – you just opened a ticket!

Thanks for attending the 2022 Lake Conroe Invitational Pickleball Tournament. Drop us your vitals here and a member of our team will reach back promptly to schedule a time to review and explore opportunities for shared technology success.

Thanks for reaching out and #ChillingWithTOP. Drop us your vitals here and a member of our team will reach back promptly to schedule a time to review and explore opportunities for shared technology success.

Once you have entered all required contact details, you will be prompted for more information about your request.